Paying tribute to the man in black, we’re having a sale!!

Today only, get 25% off the Johnny custom made muscle tank when you enter the code CASHBASH upon checkout! 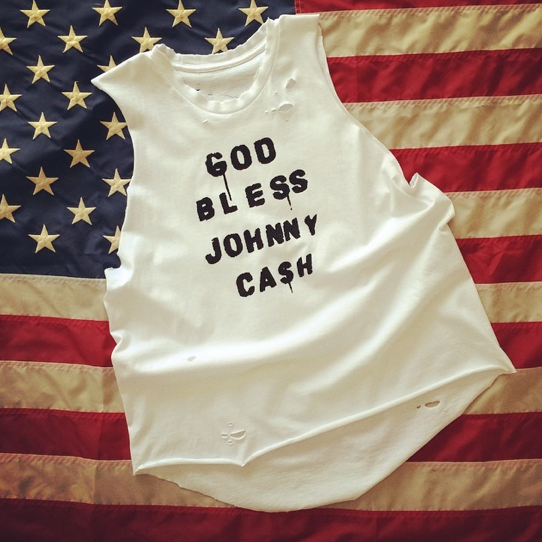 Johnny Cash, the greatest cowboy of them all, was born on this day back in 1932. We’re celebrating the Man in Black’s would-be 78th birthday with an interesting fact for every year since then. Revel in the random Cash-related miscellany — from what he nicknamed his tour bus to which president was his all-time favorite — after the jump.

1. Johnny Cash started smoking when he was 12 years old.
2. The Masons rejected Cash’s application for membership “on moral grounds.”
3. Cash learned how to hypnotize himself from country singer Johnny Horton.
4. To commemorate his birthday, Cash’s family wants you to wear black.
5. Cash adopted his signature all-black suits as a good luck charm after he wore a black t-shirt and jeans to his first public performance.
6. His first gig with the Tennessee Two was playing for a group of elderly ladies in a church basement.
7. When he was a child working in the cotton fields, Cash used to eat young cotton buds, despite his mother’s warnings that they would give him bellyaches.
8. He took only one voice lesson, after which the teacher advised him not to let anyone change the way he sang.
9. His parents named him J.R. Cash as a compromise between the names “John” and “Ray.” When he enlisted in the Air Force, Cash gave his name as “John R. Cash.”
10. The first song he remembers singing was the hymn “I Am Bound for the Promised Land.”

11. Though he was never in prison, Cash served a total of 7 nights in jail for different incidents.
12. After being arrested for trespassing in Starkville, Mississippi, Cash broke his toe trying to kick out the bars of his jail cell.
13. The title for “Walk the Line” was a suggestion from Carl Perkins.
14. During his act in the 1950s, Cash flaunted a killer Elvis impersonation.
15. During his stint in the Air Force, Cash learned to translate Russian Morse code.
16. He bought his first guitar in Germany for 20 deutschemarks ($5 American).
17. The first song he heard on a radio was “Hobo Bill’s Last Ride” by Jimmie Rodgers.
18. While in the Air Force, Cash traveled to London for Queen Elizabeth II’s coronation.
19. When he first tried to record for Sun records, Cash pitched himself as a gospel singer. After that didn’t work, he just sat on the steps of the recording studio until he could convince Sam Phillips to listen to his songs.
20. Roy Orbison was Cash’s next-door neighbor in Tennessee for over 20 years.

21. Cash advised Jerry Lee Lewis not to record “Whole Lot of Shakin’ Goin On,” preferring his rendition of Jack Clement’s “It’ll Be Me.”
22. Cash used to exchange birthday greetings with Elizabeth Taylor, whose birthday is the day after his.
23. “Blue Suede Shoes,” Cash claims, came from a story he told Carl Perkins about an airman who used to tell Cash not to step on his blue suede shoes.
24. Cash’s advice on living life on the road: “Back in 1957, there was no Extra Crispy. Other than that, it’s the same.”
25. When Cash first moved to Memphis, he enrolled in a radio class at Keegan’s School of Industry, hoping to become a DJ.
26. The first time Cash met honky-tonk pioneer Ernest Tubb, Tubb advised Cash, “Just remember this, son. The higher up the ladder you get, the brighter your ass shines.”
27. At the Carter Family Fold, a mountain music concert hall in Virginia, Cash was the only artist allowed to use an amplifier.
28. He met his first wife, Vivian Liberto, at a skating rink in San Antonio.
29. During his time in the Air Force, Cash wrote all his letters to Vivian in green ink.
30. After Johnny Carson moved to New York to start The Tonight Show, Cash bought Carson’s house in Encino.

31. The camper Cash used for his amphetamine binges in the desert was named Jesse James. It had its windows spray-painted black so Cash could sleep during daylight hours, “but also because I just liked to spray-paint things black.”
32. After an oil leak from Jesse James set the Los Padres National Wildlife Refuge on fire, Cash became the only person ever successfully sued by the U.S. for starting a forest fire.
33. The blaze Cash’s camper started killed all but 9 of the endangered condors at the refuge. When questioned about the birds at the deposition, Cash replied: “I don’t give a damn about your yellow buzzards.”
34. Country guitarist Merle Travis taught Cash how to sink a Bowie knife at twenty paces.
35. The first time Cash met songwriter Peter Le Farge, Cash gave him enough Thorazine that Le Farge slept for “three or four days.”
36. An ostrich attack left Cash with five broken ribs and internal bleeding.
37. During a hospital visit for surgery, Cash smuggled in a card of Valium in the bandages over his suture. (Half of the pills dissolved into the wound.)
38. At his house in Jamaica, Cash had a “Billy Graham room” with a guest bed specifically for Graham.
39. President Jimmy Carter was June Carter’s cousin, related to Cash by marriage.
40. Cash was also distantly related to King Duff, the first king of Scotland.

41. Carrie Cash, Johnny’s mother, worked at the gift shop for the “House of Cash” museum until her death.
42. Muhammad Ali wrote a poem for Cash called “Truth” which Cash kept locked in a vault.
43. The motto on the Cash family coat of arms reads “Better Times Will Come.”
44. In the 1985 miniseries North and South, Cash played the abolitionist John Brown.
45. He wrote, produced, and narrated Gospel Road, a movie about Jesus’ life, which featured June Carter Cash as Mary Magdalene.
46. The same night Cash got fired from the Grand Ole Opry, he crashed June Carter’s Cadillac into an electrical pole.
47. Cash collected 19th century guns and antique books.
48. At Dolly Parton’s first performance on the Grand Ole Opry stage, Cash coached her backstage.
49. When Cash was 5 years old, his dad shot his dog for eating the table scraps meant for the hogs.
50. When visiting the White House, Cash compared shoe sizes with President Clinton. Cash is a size 13, Clinton is a size 12.

51. Cash’s signature introduction (“Hello, I’m Johnny Cash”) debuted at his concert at Folsom prison.
52. According to his autobiography Cash, if he were stuck on a desert island, Cash would bring Bob Dylan’s The Freeweelin’ Bob Dylan, Merle Travis’ Down Home, Jimmie Davis’s Greatest Gospel Hits, Emmylou Harris’ Roses in the Snow, Rosanne Cash’s The Wheel, a gospel album by Rosetta Tharpe, “something by Beethoven,” and You Are There by Edward R. Murrow.
53. The tune for “I Walk the Line” was inspired by a recording of Bavarian guitar music Cash had accidentally played backwards.
54. Once, on tour in the late 1950s, Cash and his band members bought 500 baby chickens and a hundred of them loose on each floor of a hotel.
55. At another hotel, they flushed cherry bombs down the toilet and blew the plumbing out.
56. The 1962 crime drama Five Minutes to Live was Cash’s first role in a full-length feature film.
57. On his tours in the early 1960s, Cash was billed as “America’s Foremost Singing Storyteller.”
58. Cash spent a night in jail in El Paso for smuggling two socks full of amphetamines across the Mexico border.
59. During Cash’s divorce, he shared an apartment in Nashville with Waylon Jennings.
60. Before one meeting with his addiction counselor, Cash drove a tractor into the lake beside his house.

61. The scar on the right side of Cash’s face was from a botched surgical procedure while he was in the Air Force.
62. Cash guest-starred as Kid Cole on four episodes of Dr. Quinn, Medicine Woman.
63. June Carter finally accepted Cash’s proposal for marriage at a hockey arena in Ontario.
64. In 1984, when Cash felt that his record label was ignoring him, he released an intentionally awful album called Chicken in Black, with atitle song about Cash’s brain being transplanted into the body of a chicken.
65. He used to carry around a jar of instant coffee and ladle spoonfuls of it into the coffee he ordered in restaurants.
66. The first episode of The Johnny Cash Show featured Joni Mitchell and Bob Dylan as guests.
67. On Independence Day in 1976, Cash served as grand marshal for the federal government’s bicentennial parade.
68. In 1986, Cash published the novel Man in White based on the life of the apostle Paul.
69. Cash’s video for “Delia’s Gone” shows Cash tying up and burying Kate Moss.
70. Richard Nixon was Cash’s favorite president.

71. While checked into the Betty Ford Clinic in the 1980s, Cash met and befriended Ozzy Osbourne.
72. After his wife June died, Cash had her Wildwood Flower album cover painted on the elevator in his house.
73. Cash suffered from aviataphobia (fear of flying) and ophidophobia (fear of snakes).
74. In the Air Force, Cash wrote short stories under the pen name Johnny Dollar.
75. During his first two years touring, Cash clocked over 100,000 miles of road travel.
76. Cash once stuck a bowie knife into a hotel room’s reproduction of the Mona Lisa that didn’t meet his standards.
77. As a 22-year-old inmate, Merle Haggard saw three of Cash’s shows in San Quentin. He later credited Cash for inspiring him to work on his singing.
78. “The Man Comes Around” came from a dream Cash had about the Queen of England.